Posted February 21, 2019 by Children in Crossfire in Blog 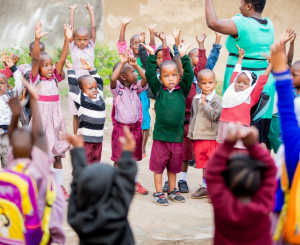 Songs and dance time during the morning circle, in Mwanza Tanzania.

Diversity is a key strength of humankind. Our differences allow us to complement each other and as a diverse group achieve the common goal of a better life for all. Thursday the 21st February marks Mother Language Day. This is an important day worldwide, language has close ties with cultural identity, communication, learning, education and development and should be celebrated. Globalisation which has helped create a world community can be seen by some as a threat to cultural traditions such as different languages however through celebration of Mother Languages through dedicated days such as these and through the sharing of these unique and wonderful ways of communicating we can share and celebrate the languages which enrich our culture.

Children in Crossfire (CiC) celebrates and supports initiatives which bridge continents. This enables us to touch many lives and achieve global goals such as the sustainable development goals. In our head office based in Ireland, English is the spoken language, but as an organisation who aims to enrich the early years’ experience for thousands of Tanzanian and Ethiopian Children we have had the privilege of being introduced to many different mother languages unique to different areas in these countries.

In Tanzania, for example, through the Integrated School Readiness Program (ISRP) we have experienced the national Language, Kiswahili. Despite this being the national language, it is often the case that in the classroom CiC trained teachers will often be teaching a class of 3-5-year olds who have many different mother languages! Did you know that there are over 120 vernaculars spoken in Tanzania! Mother languages should be cherished and celebrated but we recognise that to enable children to gain the most from their early years education that learning to speak Kiswahili is incredibly beneficial. Many of us may feel intimidated at the thoughts of leaning a second language but research has shown that the earlier children begin to learn a second language the better! 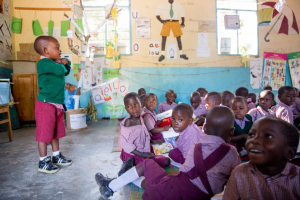 Child-led session in a pre-primary school in Mwanza, Tanzania

Teaching a class of pupils with such a broad range of mother languages isn’t without its difficulties!

Tekla Kapinga of Mlumbilo Primary School in Morogoro said at one point she had to request translators to come to her classroom to assist her communications with new students who spoke only Kimang’ati . Kimang’ati is a language spoken by the Datooga people of the Great Rift Valley in Tanzania.

“Luckily within a few months the children catch up with the rest of their classmates using Kiswahili, because of the teaching techniques we have learned from ISRP.”

With patience and teaching the children we work with are able to learn Kiswahili as a second language. They are active and successful learners due to the advantage of being bi-lingual. The importance of Mother Language is recognised globally and is regarded as one of the most effective ways of acting and performing cognitively, socially and communally.

Our Integrated School Readiness programme is implemented under the country strategy (2017–21). This increases children’s readiness for school by improving their experience of and opportunities for Early Childhood Development, particularly in the home and in early educational environments.

The programme intends to benefit children by working with parental figures in the home and educators in community preschool and government pre-primary classes, as well as supporting structures, to improve behaviour and practice towards supporting children’s protection and development.

CiC Tanzania has had great success with a similar Early Childhood Education project in Mwanza and Kilimanjaro, called Fursa kwa Watoto. Follow this link to watch a special video and find out more.