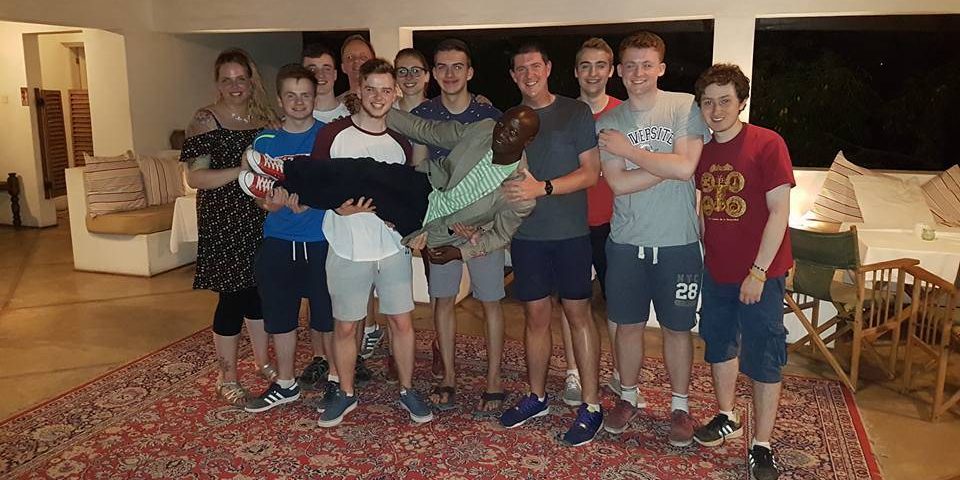 Derry at 04:00 on a Friday morning is, predictably, deserted. Yet outside Saint Columb’s College stood a group of weary-eyed individuals, weighed down with luggage and yawning into the cold night air: the only (half-awake) vestiges of life to be found in the city. We were all excited, of course, but little did we know that we would be embarking upon such a life changing trip.

In order to survive our hideously long journey, many of us ended up speaking to other passengers on the flight. One such passenger revealed to me that seven days was simply too short a time to fully experience Tanzania: at the time I was perhaps inclined to believe her, but by the end of the trip I realised how wrong we were. In seven days we were able to criss-cross Tanzania, visiting Dar es Salaam, Mwanza and Moshi – three very different areas, allowing us to gain an insight into the very diverse cultures and ways of life which makes Tanzania such a fascinating country.

Our first destination, Dar es Salaam, was most certainly “a city of contrasts”. It had luscious beaches, glorious waterfronts adorned with bars and walled embassies, hiding beautiful gardens. Yet minutes – if not metres – away stood slums. As part of our cultural trip, it was important that we were able to experience both sides, in order to gain a fuller picture of life in Tanzania’s largest city. Indeed, it is quite the contradiction to the traditional prejudice of Africa being entirely poverty-stricken. We were able to experience the comfort through visits to restaurants, for example, but the most lasting memory for me is the bike tour, which guided us through the city’s slums. Even here we came to understand that life is not a singular experience for everyone: we had the opportunity to witness a plethora of different livelihoods from traditional coffee making, to crowded market places and even to entrepreneurism in a make-shift cinema.  An activity as simple as a bike tour not only opened our eyes to occasionally upsetting scenes, as we might have expected, but it also allowed us to witness the many different ways of life. Dar es Salaam is a place in which you can constantly peel back another layer and witness the immense diversity of the city.

Our time in Dar es Salaam also included a visit to Usjasiri House, the country’s only hospital dedicated to caring for children with cancer. When first reading the itinerary, I expected this to be the most difficult experience. Among all the sickness, however, there was still a sense of indefatigable optimism, be it in the resilient spirit of the resident doctor, who has worked with Children in Crossfire to help achieve a 70% survival rate in curable cancer cases, or the children themselves, who did not allow illness to come in the way of fun. It was a humbling experience to play with the children, first on the more traditional slides and swings, and then on our mobile phones. Even in Tanzania the iPhone trumps all other toys for toddlers – some things simply don’t change however far you travel! 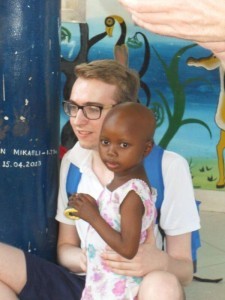 Mwanza was our next destination and it was here that the natural beauty of Tanzania really shone through. Our hotel, on the shores of Lake Victoria, was simply unbelievable. The important lesson we learned about Lake Victoria, however, is that despite how lovely it is to admire and look at, it poses a somewhat uncomfortable journey when crossing it, as we did on our way to Bezi Island. The perilous journey would nonetheless prove to be worth it when we finally reached the primary school. The previous day we had a wonderful opportunity to visit the pre-primary and primary school facilities constructed with the help of Children in Crossfire, but it was here that we were able to see the results in action. The children suffice to say were rather excited about our arrival – inevitably their excitement reached fever pitch when the phones were taken out and selfies taken. It was a brilliant half an hour or so of impromptu football, picture taking, and trying to show off “gains” with the number of children we could lift. It was a really wonderful opportunity to see how education impacted on their lives, even on the most remote of islands.

The final destination of our trip was Moshi, a city which I came to fall in love with. Unlike Dar es Salaam or Mwanza, there was a more cosmopolitan feel to Moshi – perhaps this feeling was fostered in the fantastic markets, where you certainly had to be prepared to bargain and say “no asante” if necessary! In Moshi there was a particular focus on visiting the educational projects funded by Children in Crossfire and – for me – this provided for some of the most memorable excursions. I doubt any of us will ever forget playing football at Saint Amadeus, with the most breathtaking mountains and valleys in the backdrop and the sun beating down on our necks. The final score (3-1 to St. Amadeus, I believe) was considered a good result by the Derry men, for we had been frightened a slaughter awaited us. The secondary school itself was incredible: funded by Children in Crossfire within the last 6 years, it has gone from strength to strength and has now established itself as one of the leading schools in the country. Over the next few days we visited more primary schools, including a fateful visit during breaktime in which a number of us were ignominiously chased across the pitch by a crowd of some twenty kids.

These are but a few snapshots from my time in Tanzania: there are so many other outstanding experiences, such as the visit to the hot springs and the – often hilarious – meals and drinks we shared each night. Indeed, a whole article could be dedicated to the trials and tribulations of the “Moshi 6” as we sought to make our way home.  I will truly never forget our cultural visit to Tanzania and I am incredibly thankful to Children and Crossfire for providing the opportunity. I am most thankful, however, to the brilliant, untiring and inspirational work of Donna as well as the care, guidance and constant laughs provided by Mark and Fr. McGavigan. This is only the beginning, I am sure, of my journey with Children in Crossfire: but what a beginning it has been!

Donate Now To Our Tanzania Programmes 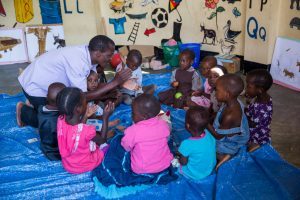 We are passionate in our belief that all children in Tanzania should have the opportunity to grow and thrive to reach their full potential. We believe wholeheartedly in a child’s right to have their basic needs met and access a good education.  We believe that a child who arrives at school feeling healthy, happy and socially developed is a child with a solid foundation to fulfill their dreams and ambitions.  We therefore work in Tanzania  to ensure children get the best start in life through meeting their needs in the early years.

IT COSTS ONLY £19 TO SUPPLY A LEARNING KIT IN ONE OF OUR PRE-PRIMARY CLASSES IN TANZANIA. DONATE NOW!

A collection of photos provided by the Students and Mentors from the 2016 Cultural Trip.