Day of the African Child – Protecting Babies Born Too Soon

“It broke my heart going back to work and leaving my tiny child at the end of my maternity leave, but I felt worse when one day I got a call to come back home quickly because my baby was having difficulty breathing, a condition I was told is called Apnea,” narrates first-time mother, Iman Khatib.

In a country where over 200,000 babies are born premature and over 11,000 of them die from preterm birth complications, life-saving campaigns like those organised by Doris Mollel, a former beauty queen who was born prematurely herself, are to be supported and applauded.

Through her organisation, the Doris Mollel Foundation (DMF),  a panel discussion was organised last Saturday in Dar es Salaam, where testimonies from parents of premature babies, medical workers and adults who were born prematurely met to discuss and urge the government to extend paternity and maternity leave for parents of premature babies. It is said that ‘everyone has a story’ and many stories were told during the event. 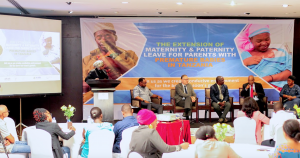 “I was born prematurely, luckily I have survived the extreme allergies and other challenges facing babies who were born too soon. My eyesight was however affected because of early exposure to sunlight.”—Innocent Mungy, Communications Expert

“To date, my twin boys (who are 23 years old) suffer from effects associated with being born prematurely. Some consequences do not appear immediately but leave the children with challenges for the rest of their lives.”—Alvaro Rodriquez, United Nations Resident Coordinator

“I know the pain of losing a child and I know the huge effort it takes to care for a premature baby.” –Sizya Puya, Business Consultant

“For over two decades I have worked with preemies, to increase the rate of survival among these babies, we do not need more incubators, rather more time with their parents, especially mothers. Kangaroo Mother Care practice saves the country money and saves precious lives of these tiny Tanzanians who also deserve to survive and thrive”—Dr Augustine Massawe, Muhimbili National Hospital

“I gave birth to triplets and lost one, after two difficult months we were evacuated to Aga Khan Hospital Nairobi, upon returning back my maternity leave was over. You see a preemie born at 34 weeks and 29 weeks face totally different challenges.”—Beatrice Mbawala, Government Employee

At the event, the Minister of Health, Community Development, Gender, Women, Elderly and Children was represented by Dr Ahmadi Makuwani who is the Director of the Reproductive, Child Health Services. Dr Makuwani said that he noted concerns raised by the participants, representing civil society, businesses, United Nations, media and individual parents and children who were born before the full term in the womb. Participants unanimously suggested an extension of maternity leave for mothers of premature babies from the current 3 months to 6 months. They also suggested an extension of paternity leave from 3 days to 1 month.

In this week leading up to the Day of the African Child on June 16, protecting the lives of premature babies has been given priority even in the Parliament of Tanzania where debates on promoting the increase of parental time with the babies have taken place. It makes sense economically, socially, and in terms of health and survival as Tanzania joins the international community led by the United Nations to ‘leave no one behind’ especially noting that 1 in every 9 babies in Tanzania are born prematurely.

At Children in Crossfire we strive to contribute to creating a compassionate world where every child can reach his or her full potential, so we are therefore delighted to support this campaign for the benefit of pre-term born babies.

Our children are our most valuable treasure. #watotowetutunuyetu

Happy Day of the African Child!

This blog was written by Chiku Lweno of Children in Crossfire, who moderated the Panel Discussion organised by DMF on Saturday, June 9, 2018