Posted March 5, 2019 by Children in Crossfire in Blog 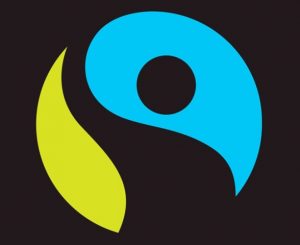 Children in Crossfire is delighted to work in partnership with Foyle Fairtrade as they mark Fairtrade Fortnight 2019 with a series of events, workshops and activities!

This is Derry’s 5th birthday as a Fairtrade City. We achieved Fairtrade City Status in 2014. You will see the signs as you enter the city from all directions!

In 2018 we extended status to the new Derry/Strabane council district, the first region in the north to achieve this. Fairtrade is a great idea but only if you buy Fairtrade branded products. With more cafes committed to selling Fairtrade in the city region, we launched the fortnight by transforming the iconic Free Derry Wall with a paste over tweak so that it now reads, You Are Now Entering Fairtrade Derry. 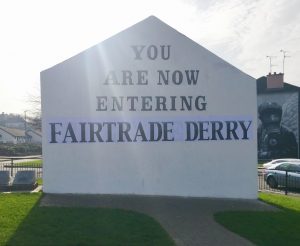 As well as lobbying local businesses to engage with Fairtrade, our approach is to focus on art and education workshops in schools and youth clubs to embed the importance of the movement in the city region going forward. During this year’s fortnight, we will host a primary schools art workshop for 6 local schools in Eden Place Arts Centre as well as workshops in the Fountain Youth Club and Youth First in the Bogside. These are emblematic of a programme of workshops with schools and youth clubs scheduled for the coming year. We are delighted that this year again, given our work on the ground we will host one of the two visiting grower/producers visiting Ireland. Sara Montoya from the COOPCAFER coffee co-op in Colombia will join us in our school’s workshop on 8th March. She will be able to give the children a direct tangible sense of how her community creates Fairtrade and the difference it makes to their lives. 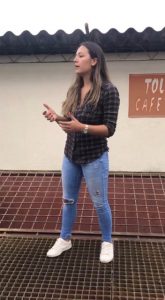 Sara Montoya – In her own words… “Who I am? What is my name? Answering these questions would be the right way to start – the fact is that I am not a single person, nor do I have a single name … but I will not leave you without an answer: I am Mrs Lucia, Mrs Rosa, and Carmen, I am also Mr Manuel, Gonzalo, the young David, little Juanita and Esteban, I am the daughter not only of a guild, nor a community, but a family, a family that not only moves for its plantation but also for what it brings with it: values, traditions, experiences and memories.”

The Power of YOUth for trade justice. This project is launched with a youth club in the Bogside and a youth club in the Fountain. They will participate in an interactive session with Foyle Fairtrade activists on the difference Fairtrade makes to communities. It will culminate in a miniature wall/sign, to be displayed inside or outside their youth club, creatively expressing their thoughts/understanding of the importance of being part of this justice movement that transforms lives. Will it result in the youth club signing up to be a Fairtrade Youth Club, committed to only buying and serving Fairtrade Tea and Coffee in their premises and at their events? We shall see.

Every day of Fairtrade Fortnight

Cafes where you can get a Fairtrade cuppa during the fortnight.

Hidden City Cafe: This ethical cafe is committed to local organic produce and Fairtrade. During Fairtrade Fortnight you a 20% reduction on its Coffee, Tea and Hot Chocolate.

The Coffee Tree: This little gem of a cafe on Strand Road is committed to ensuring that all its coffee and tea is Fairtrade Certified during Fairtrade Fortnight.

MeKong Restaurant: This is the best place to dine out in Derry for those who’ve discovered it. During Fairtrade Fortnight besides its great food, it will only be serving Fairtrade tea and coffee.

Sainsbury’s Cafe: As one of the biggest retailers of Fairtrade products Sainsbury’s and its cafe will be doing their own inshore promotion. They will host a Fairtrade Coffee Morning in their cafe on Monday 4th March. Check store for details.

Starbucks Cafe: As one of the biggest coffee chains committed to Fairtrade products Starbucks will be doing their own instore promotion. Check store for details.

The Hidden City Cafe Derry’s 5th birthday as a Fairtrade City this discussion explores the complex world of the international coffee trade through the local lens of cafe owners, retailers and wholesalers. This is a participatory discussion event open to everyone. It will be facilitated by Jim Keys, speakers to be confirmed. It’s a chance to pool our knowledge as a city to explore to what extent the Fairtrade initiative is part of transitioning us to a world where all trade is fair, what might be its shortcomings, and how we can help address those shortcomings to speed the transition.

Friday 8th March Power to the Pupils: Education is the most powerful weapon we can use to change the world! In partnership with Eden Place Arts Centre, we will engage with 6 local schools to explore Art as a tool for social change! Students will have an opportunity to learn more about Fairtrade and hear from Sara Montoya a coffee producer from Columbia who will share about the difference Fairtrade makes to farmers, producers and communities. Students will produce collective art pieces to share awareness and encourage others to choose Fairtrade products when possible.

Friday 8th March Holding Up Half The Sky: A Celebration of the role of women within the Fairtrade Movement. This year given our guest Sara Montoya and the fact that it’s International Women’s Day our 5th Birthday Celebration will focus on the difference Fairtrade makes to gender equality.

© 2020 Children in Crossfire. All Rights Reserved.
Site by Thrive Web Designs |  Supported by the Secure Base Foundation
We are a registered charity in Northern Ireland (NIC101412) and The Republic of Ireland (CHY 20045517). Children in Crossfire is now also a registered 'Not For Profit' in the USA and is recognised as tax exempt under section 501(c)(3) of the Internal Revenue Code (EIN 46-2267122). We are developing Advisory Groups in Chicago and Boston to assist with a fundraising programme.
Select your currency
GBP Pound sterling
USD United States (US) dollar
EUR Euro