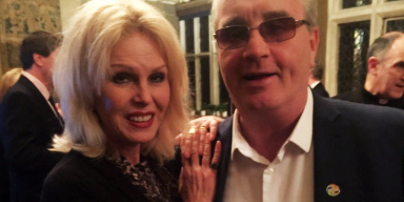 Award-winning actress and activist, Joanna Lumley OBE, has been confirmed to join His Holiness, the 14th Dalai Lama of Tibet, in Derry/Londonderry on day two of his visit to the city, which will mark the 20th Anniversary of Children in Crossfire.

Joanna will be speaking at a conference on Monday 11th September, which will follow a separate public event taking place on Sunday 10th September entitled ‘Compassion in Action’, aiming to encourage people to be the change they want to see in the world.

Joanna Lumley is recognised as one of Britain’s foremost actors, having starred in a number of major domestic and international films and television series. Throughout her career, Lumley has also been an advocate of various political and social causes.

“We are delighted that Joanna Lumley will be joining us for our 20th Anniversary celebrations. Joanna is a tireless campaigner and incredible ambassador, who’s work defending human rights is an inspiration to us all, and we look forward to warmly welcoming her to Derry/Londonderry.”

“I am honoured to have been invited to take part in Children in Crossfire’s 20th Anniversary. His Holiness, the Dalai Lama, is a spiritual leader who knows and understands the power of ‘Compassion in Action’ on a global scale. I am also delighted to be associated with such a wonderful organisation that is doing inspirational work to help vulnerable children across the world.”

Further details of the visit will be announced in the coming weeks on childrenincrossfire.org/DalaiLamaVisit