Richard Moore has personally thanked the participants for this amazing achievement and triumphant success.  It never ceases to amaze the lengths in which people are willing to go to support charity, particularly Children in Crossfire.  Because of these people, we are able to help those who need it most.  Thank you.

An incredible group of 28 cycling Celts took part in this historic event, which saw the Bhoys and Ghirls depart from Celtic Park and make their way to Portsmouth, before catching the ferry to Santander. The group then cycled through Spain, before finally arriving in Portugal at the hallowed site of the Estádio Nacional stadium in Lisbon on Thursday, May 25, 2017.

As well as commemorating this historic day for Celtic and the Lisbon Lions, the cycle, led by supporter Paul Muldoon, raised funds for three charities close to the hearts of the participants – Celtic FC Foundation, Irish charity Children in Crossfire and Solving Kids’ Cancer.  They have currently raised £46446.67! 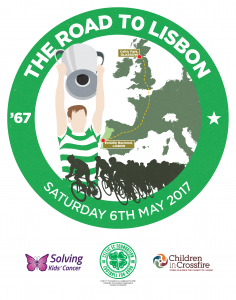 There is still time to show your support!

The money raised from this event will have a significant impact on vulnerable children in Tanzania and Ethiopia.  Children that don’t have access to food, water, medicine or education.  It’s wonderful that in celebrating Celtic’s amazing victory 50 years ago, that the organisers are helping create a legacy which will change the lives of so many vulnerable children.

© 2020 Children in Crossfire. All Rights Reserved.
Site by Thrive Web Designs |  Supported by the Secure Base Foundation
We are a registered charity in Northern Ireland (NIC101412) and The Republic of Ireland (CHY 20045517). Children in Crossfire is now also a registered ‘Not For Profit’ in the USA and is recognised as tax exempt under section 501(c)(3) of the Internal Revenue Code (EIN 46-2267122). We are developing Advisory Groups in Chicago and Boston to assist with a fundraising programme.
Select your currency
GBP Pound sterling
USD United States (US) dollar
EUR Euro