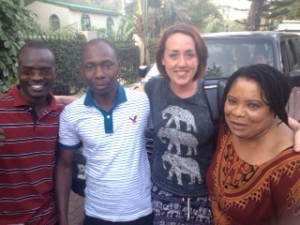 As a lifelong teacher and advocate for young children and families, Mary Kabati embodies the Children in Crossfire values.  Mary is the program coordinator for Tanzania Home Economics Association, a Children in Crossfire –funded organization that empowers individuals, families and communities in Tanzania through education and training.

After receiving training in teaching, Home Economics, rural health and community development, Mary joined the Tanzania Home Economics Association; her career focused on Early Childhood Development and has worked to implement Early Childhood Development projects in rural, underserved communities. Today, Tanzania Home Economics Association (Mwanza) makes an important impact in the areas of health, nutrition, education and economic strengthening for underserved rural communities, for the 5 past years, Tanzania Home Economics has been able to increase access to quality care, learning and development to 21,692 children aged 3-6 years in Ilemela and Nyamagana districts by promoting Pre Primary school education through community efforts with a community managed micro finance synergy. Also, has been able to increase access to credit facilities for 31,138 farmers and increased the household income from 500/= per day to 3,500 per day in the targeted communities in Sengerema, Ukerewe, Nyamagana and Ilemela districts. TAHEA Mwanza has been able to improve household food security among 48,257 participating farmers from 1 – 2 meals per day to 2 – 3 meals per day in Sengerema, Ukerewe and Geita districts.

Mary has participated in International meetings where children and women were discussed, including

Through her work, advocating for young children and their families in partnership with Children in Crossfire, Mary and her team has been able to bring significant change to the lives of people, her passion for Tanzanians is an inspiring example for those seeking example around the world.

“Children and women keep me going and as they change, I change with them and together we have the power to transform” Mary Kabati.

© 2020 Children in Crossfire. All Rights Reserved.
Site by Thrive Web Designs |  Supported by the Secure Base Foundation
We are a registered charity in Northern Ireland (NIC101412) and The Republic of Ireland (CHY 20045517). Children in Crossfire is now also a registered 'Not For Profit' in the USA and is recognised as tax exempt under section 501(c)(3) of the Internal Revenue Code (EIN 46-2267122). We are developing Advisory Groups in Chicago and Boston to assist with a fundraising programme.
Select your currency
GBP Pound sterling
USD United States (US) dollar
EUR Euro