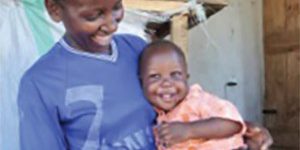 I was at a meeting at the CCBRT Moshi office and they said there was a “Club Foot” clinic going on that morning that they would like me to visit. So, off I went. In the doctor’s office there was a one-year old boy called Tony with his mother Beatrice. Tony was born with severe bi-lateral club feet. Luckily, the midwife told Tony’s mother to go to CCBRT as soon as possible to access treatment for her son.

Tony received a managed course of treatment that has totally straightened his feet out. However, Tony still needs to wear a foot brace for another few months, but essentially he is totally cured and he will learn to walk in the same way as other children do. It was a wonderful example of exactly the kind of child we are targeting in the area of our work with CCBRT.