Stand up and be Counted 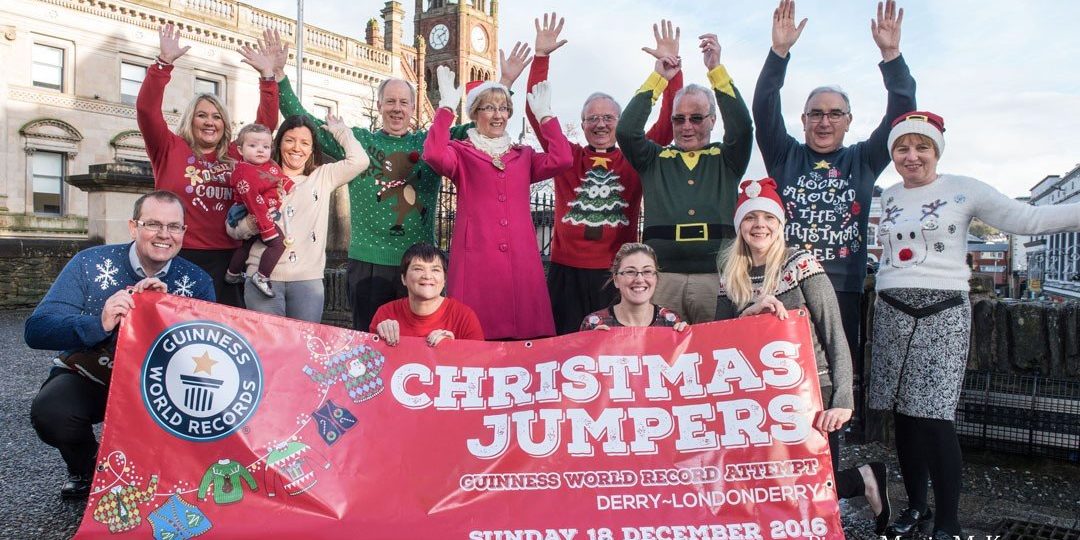 Deep in your wardrobe, hidden far from the light of day, lies a garish and slightly embarrassing knitted seasonal creation that is patiently waiting for you to wear it.

Leaving your Christmas jumper unloved and unworn may be acceptable for most of the year, but it’s now time to stop being ashamed of your festive woollies and embrace the tastefully tacky Christmas chic that only seasonal knitwear can provide.  And while you’re making fashion waves, why not help us to raise vital funds for some great causes at the same time?

On Sunday 18th December, put on your knitted festive best and join us at Waterloo Place, Derry~Londonderry at 1:30pm for an attempt to set a new Guinness World Record for the biggest gathering of Christmas jumper wearers in one place (registration details below).  At 2:00pm, we will set out through Magazine Gate to be counted and take a short walk around the walls to give your seasonal woolly the outing it deserves.

All proceeds from the event will go to benefit Children in Crossfire, Concern Worldwide, Foyle Hospice, Muscular Dystrophy UK #Team Evan and the Mayor’s Charity’s.

Who:     Everyone! Just dress to impress in your favourite Christmas jumper.

What:   Christmas Jumpers Guinness World Record Attempt. This event is an attempt to beat the current world record of 3,473 people wearing seasonal jumpers in one place at the same time.  We don’t just want to beat it though; we want to smash it with an ambitious target of over 5,000 people wearing Christmas jumpers on the day – all while raising funds for great causes.

Stand up and be counted! Participants will be counted as they pass through Magazine Gate before going on a short walk on the historic walls of Derry~Londonderry.