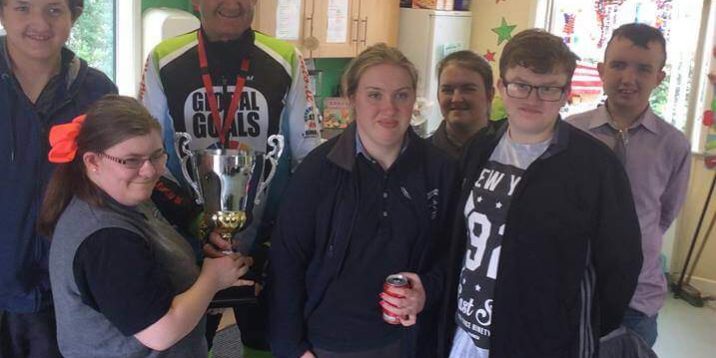 Donna Mc Feely from the Children in Crossfire Development Education had the pleasure of meeting Maurice Hurley during his cycle around Ireland to promote awareness of the Global Goals and their importance they hold in our present and future way of life.  Here’s what she had to say about the meeting;

“Yesterday I had the pleasure of meeting Maurice Hurley. Maurice is currently cycling around Ireland to raise public awareness of, and support for, the Sustainable Development Goals. The sustainable development goals, or Global Goals, are a collective effort from every country and every government, they are a promise to work towards a fair and sustainable world for everyone and the world where our planet is protected and cared for.

Maurice, a global citizen, cyclist and educator, knows that for the Global Goals to be achieved, we ALL need to know they exist and know our power in fighting for their implementation. When he’s not on his bike, he’s having pit stops in schools to find out what young people think about the goals and to get their ideas to inspire action.

Yesterday, I met Maurice in Ardnashee School and College in Derry, he’d just cycled from Raphoe and told me he loved seeing Ireland in a way that you’d miss if you were in a car. He’s right- We’re lucky to live in such a beautiful land and it’s a good reminder to be grateful for our surroundings. After a chat with some children about what was important to them and a quick tour of the fabulous Global Learning school, Maurice was saddling back up to get on the road for Bushmills where he’d be speaking to another school about the power they have to make a more just and kind world.

Maurice told me he’s taking this challenge on by himself and I have to admit that before our meeting, I had visions of an entourage… a car travelling alongside him, the first aider on hand, a camera to capture some powerful moments, but no… it’s Maurice, by himself! He has creatively packed and attached his essential belongings onto the back of his bike and is capturing the moments on his mobile phone. 2,200km in 22 days whilst journeying alone is no mean feat but Maurice does it with an aura of joy, ease and that Irish ‘keep ‘er lit’ attitude …  a smile on his face and an invitation to ask him about his journey and his purpose.

People like Maurice are the people who will change the world… the passion, energy and commitment to justice is contagious, it’s something we need to bring more of into our interactions with other people. Maurice has been interacting with people on this journey long before he even cycled his first mile. President Michael D. Higgins got wind of the challenge and congratulated him for his efforts. His support letter to Maurice captures the reason why the Global Goals are so important:

“We have many different cultures, but we only have one planet – a planet which holds enough for all of us. If we take care of this planet, and if we take care of one another, if we share more fairly what we produce and what we consume, then we can make the world better.”

The Global Goals are for governments, business people, trade unions, voluntary workers, traditional and social media & all categories of people around our planet and that includes children! Every government and every person has a role to play

I’d like to wish Maurice all the best for the rest of his journey… I hope the weather is as kind to him as the people he meets along the way!