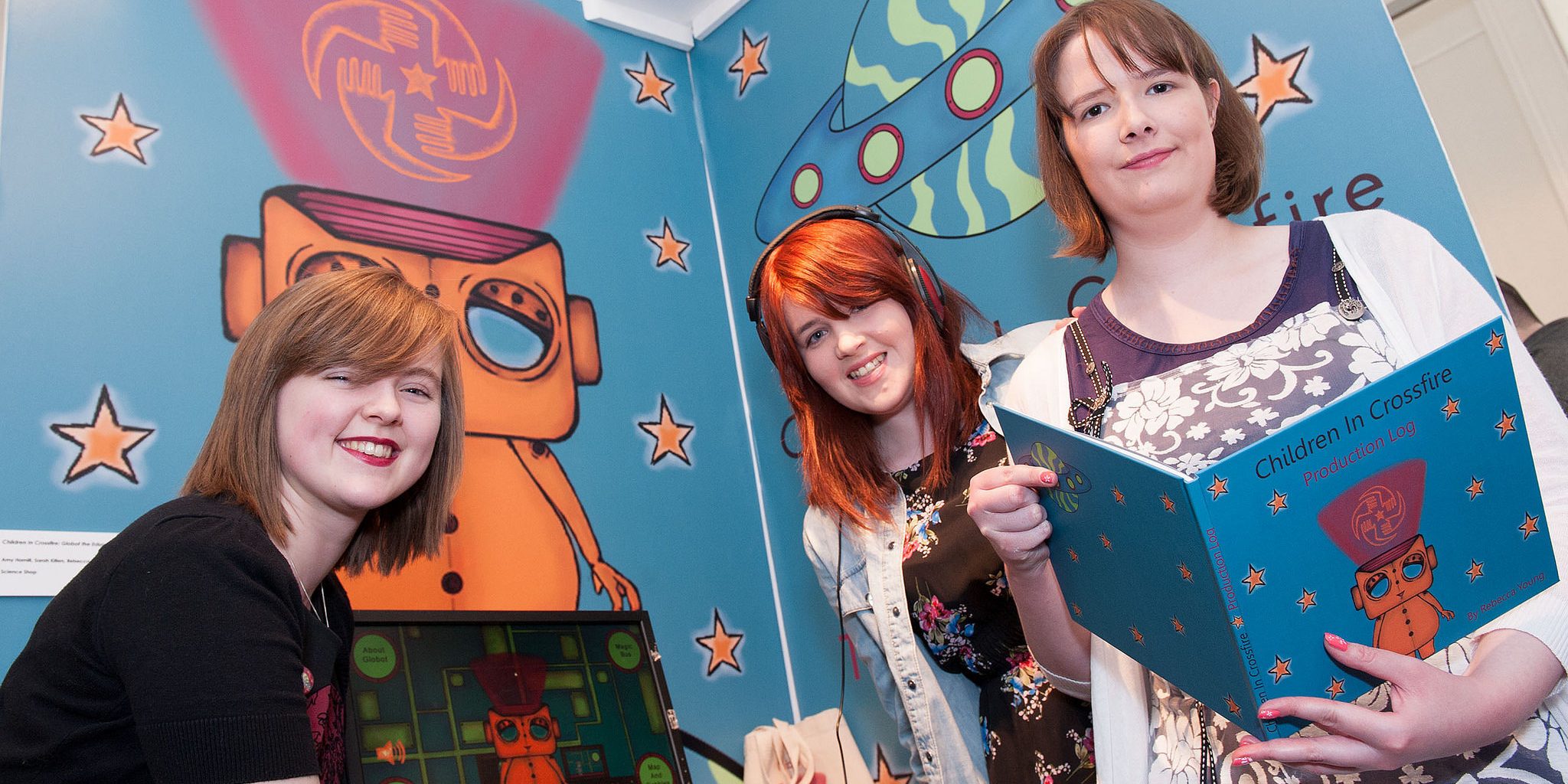 As part of our Interactive Media Arts Degree we each had to take part in a client brief for a charity organisation.  The ‘Children in Crossfire’ brief immediately appealed to me as it is involved many of my key interests such as developmental learning, character design and interactive storytelling, it turned out to be a very rewarding project.

Our client work for the Children in Crossfire organisation consisted of a conceptual redesign of their current ‘Gertie’ educational resource. The educational resources aim was to promote the awareness of Global Citizenship to the KS3 target audience in schools. To be used as a teaching aid to promote Global Citizen issues from Fair trade awareness to challenging cultural stereotypes. The resource that was already in place needed updated in terms of its characters, design style and its activity’s to better suit the KS3 target audience. As a team we hoped to use our skills to redesign the current character ‘Gertie’ and to also make the resources activities more interactive, graphic and engaging, to better suit the client’s needs. 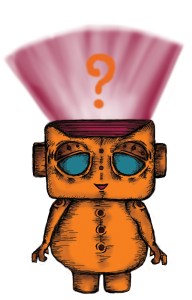 As I have a strong passion for artistic design my role in the group was the redesign of the character ‘Gertie’ and the design and creation of the assets needed for the resource. Before I started the concept design for the character it was first important to do some in-depth research into global citizenship. I first analysed the current Children in crossfire resource and other similar sites focused around global citizenship. I also looked into educational development sites, identifying the different design styles and activities used for similar types of learning resources. In our degree reading and research is significant in completing any project to a high standard, only after fully researching the meaning and areas around global citizenship could we start producing character designs and activity ideas.

From my research different character designs ideas started to develop such as ‘grown up’ Gertie, a Gertie globe, different alien characters and robot designs. We decided that Gertie had to be special, an alien and not of this Earth in order to be objective about Earths global issues. After drafts of different character designs I had three final options for client to choose from, complete with name and backstory. In the end the design and name chosen was Globot, an alien robot who had a home planet/ spaceship but because of issues of inequality and neglect of its natural resources, his planet was lost. They had to start again and so they now visit other planets and make sure they don’t go through the same mistakes. He communicates through projected symbols and words from a panel on his head. This allows information to be communicated in a more engaging, less text heavy way. This also helps the resource to be more open to citizens around the globe by communicating through symbols. The design contains some traditional robotic elements such as a rectangle head, large eyes, bolts and metallic features. But it also contains some human like elements such as friendly eyes, hair like outline, ear like antenna, a squishy body and arms and a small human like mouth. I have given the character cute facial features to make it more inviting and friendly for the target audience. The design included elements such as colour options, how it would move and communicate, giving the character more depth. 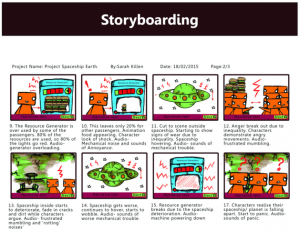 rom there we started the redesign of the current educational activities to make them more graphically and interactivity interesting. This involved storyboarding each of the activities and the creating new scenes and images which could be animated and made interactive. The skills which we developed from our degree were essential in creating the resource to promote global citizenship. Through research and creative conceptualising we were able to develop new character designs and reinvent the resources activities, focusing on areas such as character development, narrative, audience participation and interactive design. Through graphic design skills we could design and create the new assets for the activities, allowing the resource to become more interactive and engaging the KS3 audience. Technical skill and problem solving skills also played a major part in the animating, coding and development of the interactive activities. The final outcome from our work as team proved to rewarding and successful in the uplift of the previous educational resource into something more engaging and suitable to promote global citizenship. 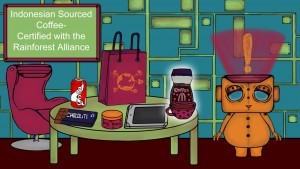 Sarah covered the visuals, as Rebecca and I began working on how exactly this resource would be created. Would it be a Flash animation? This would limit it’s compatibility. Would it be a video? This restricts it to purely passive. We needed to find a happy medium where the needs of Children in Crossfire were met, while maintaining interest for schoolchildren. After doing a quick search, we were able to see that Flash is actually extremely outdated (much to our dismay, considering we have a history working in Flash), and is barely used on websites. When it is, it doesn’t work on a lot of mobile and tablet devices, which is what the majority of the target audience would be using. We then found out and explored more about HTML 5. This is relatively new to us, and although we were eager to get started, the prospect of having to learn a new software “on the job” as it were, was extremely daunting. We toyed about with a few in-browser HTML5 animators, but in the end opted for what we know best- Adobe. We used Adobe Edge Animate CC to create any of the animations. This software ensured that the animation could be high quality, interactive and also that it would be compatible with the devices most used by 11-14 year olds.

Working alongside Sarah, we were able to come up with a story of sorts for the Globot character, and incorporate different elements within the animation. The Spaceship Globot section could have been an interactive animation, but in the end it was decided that it could in fact be more of an introductory video, showing Globot’s story. This could however be revisited at a time to create another part of the animation and make it even more interactive. However, the rest is all fully interactive, allowing teachers the space to talk about what is on the screen, but also allowing the children to play around with the software and learn what Global Citizenship is about and why it is so important.

During the coding phase, we did encounter many problems- ranging from “this part doesn’t work because a comma is inserted incorrectly” right up to “everything has been deleted for some reason”. Luckily, the software was new and there were many tutorials, and we were able to talk to Children in Crossfire to check that the layout would fit what they imagined. Apart from all the other stresses of university that were happening, I  was suffering from vertigo and was forced to take three weeks off-this put quite the halt in the group project as we were unsure what would happen, who would do what section etc. However, I was able to keep in contact with Children in Crossfire and my group members. It was an extremely tense time, but fortunately, it did all turn out how it was supposed to; the animation was completed and the most important thing-the client was happy.

While researching all of the information about Global Citizenship, Fairtrade and Equality, I found myself agreeing with the philosophies that Children in Crossfire stood for. They want to end extreme poverty, and make lives better for those in need.

I feel that this project, alongside the incredible work they are doing, is a way to reach out to people of all ages to ensure that they are at least aware of what is happening in many other parts of the world and how Children in Crossfire have helped these people and countries obtain and maintain a better quality of life.

This website uses cookies to improve your experience while you navigate through the website. Out of these, the cookies that are categorized as necessary are stored on your browser as they are essential for the working of basic functionalities of the website. We also use third-party cookies that help us analyze and understand how you use this website. These cookies will be stored in your browser only with your consent. You also have the option to opt-out of these cookies. But opting out of some of these cookies may affect your browsing experience.
Necessary Always Enabled
Necessary cookies are absolutely essential for the website to function properly. This category only includes cookies that ensures basic functionalities and security features of the website. These cookies do not store any personal information.
Non-necessary
Any cookies that may not be particularly necessary for the website to function and is used specifically to collect user personal data via analytics, ads, other embedded contents are termed as non-necessary cookies. It is mandatory to procure user consent prior to running these cookies on your website.
SAVE & ACCEPT
Select your currency
GBPPound sterling
EUR Euro
USD United States (US) dollar
Newsletter Sign-up
[]
Donate