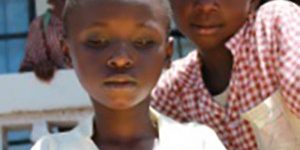 Modou is seven years old and has been blind from birth. He has been attending GOVI for almost four years. Modou lives in a compound with his family which is situated close to GOVI school. In his latest school report Modou got 95% in phonetics, his favorite subject.

His teacher, Miriama, said: “Despite his disability, Modou has a good level of independence and can move freely about the school grounds on his own, and he has no difficulties at his home compound where he can play with his sisters and cousins”.

Modou, however, was not always so independent. Miriama explained that when he first started at the school she had to carry him on her back, tell him stories and be with him for long periods of time so that he would enjoy school better. Modou’s confidence grew through time and he now loves school and even asks to attend during holidays. When he leaves school, Modou would like to be a teacher.