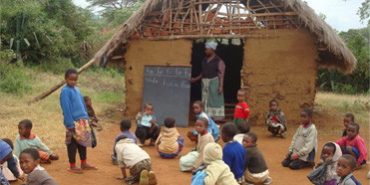 My first ever memory of Africa is that of TV ads showing images of sick, starving children living in horrendous conditions. The kind of images that were used to guilt me into eating my dinner. I remember looking at the Trōcaire box and wishing I could put my dinner into it, I bet they wouldn’t want to eat the broccoli either. It was some years later before I realized that Africa was being hugely misrepresented.

It was through music that I first began to really see Africa. I started to play the djembe, joining drumming circles and playing until my hands would no longer let me. I became hypnotized by the dancing, and fascinated by the culture. I began to get into African musicians such as Ali Farka Touré and of course, Salif Keita, a musician from Mali who has albinism, just like me.

Albinism is a rare genetically inherited group of conditions which results in a reduction or complete lack of pigment in the skin, hair and eyes. This can result in very pale skin which burns easily in the sun, virtually white hair, very severe short-sight and photophobia. To many, this may seem like a list of reasons why I should never go to Africa.

I had always wanted to volunteer overseas, to have the opportunity to lose myself in a new culture and to become part of that community, but this was surrounded by hesitation. I knew that this would mean having to convince others that this was something I could do, and that I have something to offer. While I often questioned this myself, it was no more than anyone else thinking about volunteering overseas.

In 2010 an Irish based charity, Children in Crossfire (CIC) developed a partnership with The Gambian Organisation for the visually impaired (GOVI). Together they developed a program providing the resources, teacher training, and advocacy work needed to ensure that visually impaired children in The Gambia have the same educational opportunities as their peers. The Royal National institute of Blind People Northern Ireland (RNIB NI) provided technical support. The partnership between CIC and RNIB NI then led to the development of the VIVID project (visually impaired volunteers in International Development). The idea for the project originated from a focus group of blind and partially sighted young adults who expressed their wish to use their skills and experience in an overseas development context, but felt opportunities for this were greatly limited. It was through the VIVID project that I was given the opportunity to volunteer overseas and in June 2012 I left for a 3-month placement in the Gambia.

So I began my experience as a partially sighted volunteer in a developing country. Another volunteer, who also had albinism, and myself set out to volunteer with GOVI. Sitting at the airport he pointed out that we looked like the least likely people to be boarding a flight to Africa and I am sure that at least half of our luggage was sunscreen!

Traveling for those of us with sight loss presents a number of challenges such as reading signposts, navigating unfamiliar surroundings, and making sure you get on the right plane. You would be surprised how many of us with sight loss have found ourselves at airports waiting for assistance only for someone to arrive with a wheelchair. For all of our sake, I hope this is not a reflection of how anatomy is being taught in our schools!

We arrived in the early hours of the morning and were met by staff from GOVI. We were to stay with the Njie family in the Kanifing area near Serrekunda, within walking distance of GOVI. There was the occasional obstacle such as low hanging fruit and chickens that blended into the ground, but once I had begun to get familiar with my surroundings I felt right at home. At first I was concerned for the welfare of the chickens, as I knew they were dinner, but one rooster with no concept of time soon got me past that! We were made feel very welcome and if I’m honest, if it were not for the support of the Njie family I’m sure it would have been a very different experience.

Finding a place at GOVI was not so easy. We had planned to work with GOVI to implement outreach projects in schools to highlight inclusive practice methods, whilst providing visual awareness training to students and teachers. However, it became clear early on that this was not going to be possible and that a new approach had to be taken. Over this time we had a few issues such as sickness and missing luggage. The other volunteer decided it was time for him to leave, but I was not ready to go. I found myself alone in The Gambia not really knowing anyone other than the family I was staying with and the staff at GOVI.

Due to my sight, I found it difficult to get around and in bright sunlight this is much worse. The terrain changed daily with the heavy rain and there were no clear walkways. I also knew that it was important for me to get out and meet other volunteers and find myself a support network. Meeting new people is not something I find difficult: I can safely say that reserved is not a word used to describe me. However, if you can’t see to go out, then this can cause a problem. It became clear I was going to need support if I were going to stay. I recruited a guide, Fatoumatta. I met Fatou through The Gambian Federation for Disability (GFD). She had lost her arm in a car accident as a child and was heavily involved in advocacy work with GFD.

Recruiting others with albinism, we appointed a board and began the process of registering AGA as an NGO (non-governmental organisation) and as a member of GFD. GFD had been working on the first Gambian bill on disability. This allowed us to include the needs of persons with albinism living in the Gambia. We developed a partnership with GOVI, signing a memorandum of understanding toward sharing respective values, skills and experience for the benefit of children with albinism in the Gambia. We delivered albinism awareness training to GOVI staff and began referring children into their integrated education program. We created a strong social media presence, setting up a Facebook page and linking with other albinism organisation around the world.
One of the biggest problems facing people with albinism in The Gambia is the sun. Without the right protection and knowledge of the condition, those of us with albinism are at high risk of developing skin cancer. Many of those I met already had severe sun damage to their skin. I met with families who had lost family members to skin cancer for which there is no treatment available in the Gambia. We felt it was important to raise awareness of this issue without causing fear. It is estimated that the number of people with albinism is higher in parts of Africa than it is anywhere else and many face discrimination and are viewed with suspicion within their communities. In some places such as Tanzania, those with albinism are hunted like animals for their body parts to be sold to witchdoctors.
While I am lucky enough to have never had to deal with discrimination on this level or live in fear of my life, I do know what it is like to be denied the same opportunities as everyone else, to not have access to the same level of education and to live with society’s view that if you can just manage the basic day to day stuff, then this will be a great achievement for you, to be viewed without expectation.

Sitting in West Africa I found myself sharing similar experience with people from a completely different background. We had similar stories to tell. When I first started working with AGA, there was a clear ‘you’ and ‘us’. I can’t explain what it was like when ‘us’ and ‘we’ was used to include me, and this ‘us’ soon grew again, when they began to view albinism in a global context. As a Westerner you are viewed with a higher status, and while this is by no means a good thing, in my case it definitely helped challenge perspectives.

I returned to The Gambia for a month in 2014. On my return I found AGA now had their own office space. We set to work on holding the first ever Albinism Awareness Day in The Gambia. This was a great success which is due to continue annually. At the end of 2014 AGA applied for funding for their first ever project. This was part of a wider project to plant tree within The Gambia. This was an opportunity to travel round the country raise awareness of the need for people with albinism to protect their skin from the sun.

I felt it was important to share my story as it highlights what is possible for those with a disability who want to get involved in international development! Living with a disability can be limiting, however, more often than not the focus is on the obstacles you face and not the possibilities of what you can achieve. This work continues through organizations such as Conhlamh, VSI, Children in Crossfire and RNIB NI.

As for my African experience, it was nothing like that of the TV ads. The Africa I saw was beautiful, vibrant place full of life.