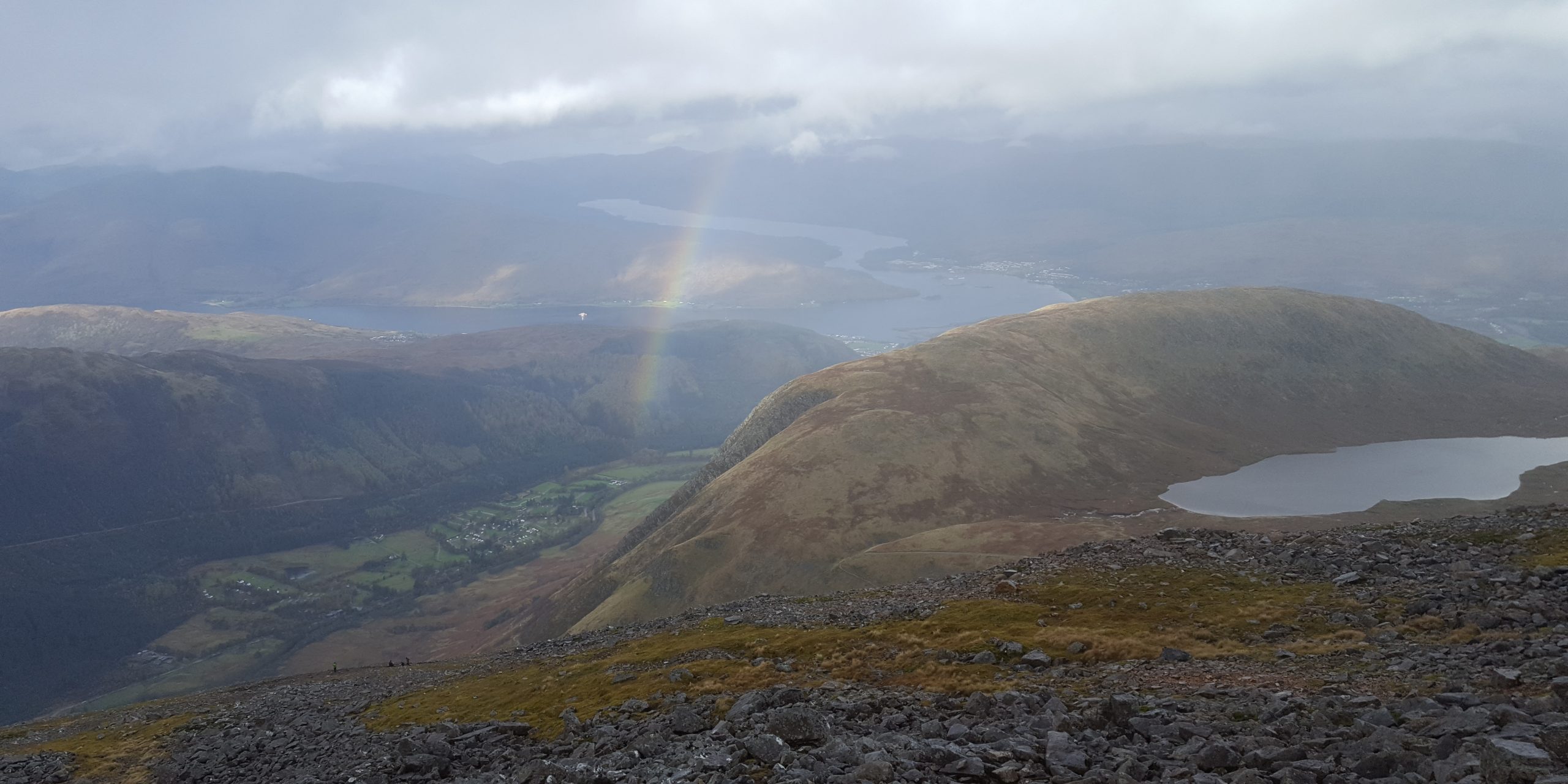 Someone described a truly modest man as one who climbs Mount Everest alone without ever telling anybody… that is not me! But what follows is hardly a boast.

On Friday October 20th came to our Fort William, Scotland hotel me, Derryman Derek, Derrywoman Joanne and an English couple – to be briefed on our attempt to conquer the UK’s highest peak the next day. Our guides (Englishman Andy and Scottish wife June) did not linger long, but met us at the mountain’s base the following morning. Off we set around 8am, with the dregs of night still lingering.

I was VERY perturbed well before the first quarter of the ascent was completed. It had already become painfully evident, to put it mildly, that walking fifty or more miles per week even in an undulating city like Derry was no guarantee of success – especially for a 68-year-old whose limited mountaineering experience had happened almost forty years previously. There were relatively flat stages on the giddy winding path that were much appreciated because of their rarity. Most sections comprised steps of roughly hewn slabs, stacked miniature boulders, or jagged rocks.

My Derry companions Derek and Joanne, with much Irish mountaineering experience, soon raced comfortably ahead. The English couple, active walkers like me and possibly in their fifties, fell way behind despite the husband having climbed Kilimanjaro. Shortly after the half-way stage I learned that they had turned back with guide June. As I struggled slowly and grimly after guide Andy, I was not convinced that I had more sense than they did… On and on I forlornly trudged, although the patient and encouraging Andy assured me that even my speed was acceptable! By this time, the rain was falling, the wind had raised its voice, and a thick mist guaranteed that there would be at most a few feet of visibility at the still distant summit. I wondered what insanity had brought me there…

“If you can force your heart and nerve and sinew

To serve your turn long after they are gone,

And so hold on when there is nothing in you

Except the will which says to them 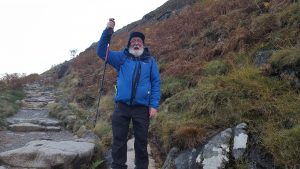 John McCallion, one of our Ben Nevis climbers, continuing his ascent up the mountain!

On reaching the mountain’s first ‘Summit Marker’ guide Andy cheered me up immensely by informing me that at my pace the goal was still about an hour away. Although happy to accompany me there, he candidly wondered if I would make the descent. Let nobody underestimate the pain in my calves, and my state of mind, on those soaked, windy and mist-enshrouded slopes. My body screamed to turn back. (See Kipling’s verse above). I told it no. I literally raised my right hand and swore to the guide that I would get back intact…  We marched through gravelly lunar-like acres as I wondered if the summit would ever come – or even if it existed!

The steep slopes beside the path in the earlier stages did not vex me but on turning a bend that Andy assured me was but a few minutes from our goal, I had a panic attack… Not too far away on my left was a cliff edge that promised a sheer drop to oblivion; I moved to the right and walked past it much quicker than I thought I could!

AT LAST we got to the summit. Andy, probably relieved that I was not a corpse, gave me a congratulatory hug. I almost forgot my aches and felt an enormous sense of accomplishment. My Derry comrades conquered the mountain in half my time. I am not proud to report that, but they agreed that I had no right to be ashamed of it either.

After a quick meal Andy and I had no reason to linger, as the thick mist totally obliterated what would have been an awesome sight.  I started the descent confidently but still slowly, emboldened by my “achievement” and wondered how accurate were assertions that the descent was more difficult than the climb… I learned when I reached the first rocky section, that set the pattern for the others all the long way down. Determining the best group of rocks to use and the optimal order in which to use them was a stressful mental challenge. Worse still, whereas my calves suffered on the ascent, now my knees started to vibrate alarmingly. I soon wondered, very fearfully, if I could keep the oath I had made to Andy to get down under my own steam. Again, on and on I went, eventually helped by guide June whom Andy summoned from below.

I lost count of the number of times I apologised to them for my tardiness, to which they always responded soothingly and encouragingly. I felt much better, and more determined to complete the journey, when Andy told me that he once had to carry a lady in her forties, not a lightweight, six hundred meters down the mountain when her knees utterly gave up.  He could have contacted the Mountain Rescue, but they would not have arrived for at least four hours; they send helicopters only to life-threatening situations!

Darkness fell and out came our head torches. With perhaps 45 minutes left, Andy unintentionally flattered me by racing ahead to get the car prepared for our arrival: He was obviously very sure that I would make it, albeit at a crawl: my knees screamed for the end, but I knew he was right… At least the weather was better on the way down.

When I exited after what seemed like centuries, I resisted the urge to kiss the ground because I knew it would require lots of assistance to get me upright again! I was beyond the end of my physical and emotional ropes. Instead, I raised my hiking stick and screamed triumphantly to the best of my limited ability. After another congratulatory hug from Andy, I collapsed gratefully into his car. (Goodbye forever, Ben Nevis).

I had defeated the mountain!

Meanwhile, I assumed my Derry companions, whose progress had not increased MY self-esteem, were no more than tired. I found them in the hotel lobby and learned that nothing could have been further from the truth! They experienced the same knee vibrations on the descent and were too terrified to stop in case their knees would surrender and not restart! Ben Nevis was twice as high as what they had previously climbed and much more inhospitable. If Derek’s 33 year-old knees and Joanne’s 38 year old pair survived despite feeling close to disaster, I wondered what miracle preserved my much older specimens?!

I am of course relieved and pleased that I accomplished what I set out to do, but my primary feeling is one of amazement bordering on disbelief that I succeeded in a task whose difficulty I enormously underestimated, in such obstructive weather, often with feelings of considerable futility.

I do wish my late, wonderful wife Robin had still been around to greet me when I finished my descent. Let me end with an inspiring and appropriate song:

Pictures from the climb 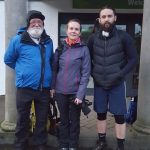 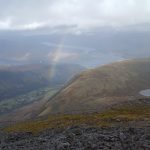 A view from halfway up Ben Nevis looking down on a rainbow! 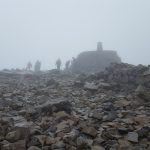